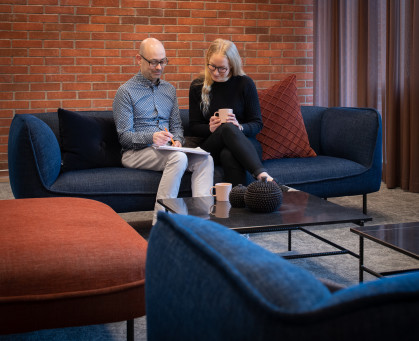 The shareholders of Affibody Medical AB (publ) are hereby invited to attend an extraordinary general meeting of the shareholders on Thursday 16 December 2021, at 08.30 am, to be held in the company’s premises, Scheeles väg 2, Solna.

Right to participate
Shareholders who wish to participate at the general meeting must be recorded in the share register kept by Euroclear Sweden AB on Wednesday 8 December 2021. Shareholders whose shares are registered in the name of a nominee must temporarily register the shares in their own name. Such registration must be completed by 10 December 2021. Shareholders are therefore advised to request such registration of the shares well in advance of this date.

Shareholders must, in order to participate at the general meeting, also notify their intention to participate to the company no later than Monday 13 December 2021. Notification shall be done in writing by letter addressed to Affibody Medical AB (publ), Scheeles väg 2, 171 65 Solna or by e-mail to camilla.danell@affibody.se. The notification shall include the shareholder’s name, address, telephone number, e-mail address, social security or corporate identity numbers and the number of shares held. Shareholders or proxies may bring up to two advisors to the general meeting, but only if the shareholders have notified the number of advisors to the company as set out above.

Item 6 (Election of new members of the Board of Directors)

Camilla Sønderby was born in 1972 and is a Danish citizen. Camilla is currently a member of the Board of Directors of F2G Ltd and Healthcare Adviser for EQT Partners. She has more than 20 years’ experience from leading positions in international pharmaceutical companies such as Takeda, Shire, Abbott, Roche and Schering Plough. Camilla has substantial experience from commercializing pharmaceuticals, but also from research and development, patient safety matters and IR. Camilla has a degree in Political Science from the University of Copenhagen. Camilla Sønderby is considered independent in relation to Affibody and its senior management and in relation to Affibody’s major shareholders.

Anders Martin-Löf was born in 1971 and is a Swedish citizen. Anders is currently a member of the Board of Directors of Cantargia AB. Anders has long experience as CFO of companies listed at the Stockholm Stock Exchange and has previously been CFO of Oncopeptides AB, Wilson Therapeutics AB and RaySearch Laboratories AB. He has also been responsible for investor relations and has held various business development positions at Swedish Orphan Biovitrum. Anders has a M.Sc. in Economics and Business from Stockholm University and a M.Sc. in Engineering Physics from the Royal Institute of Technology in Stockholm. Anders Martin-Löf is considered independent in relation to Affibody and its senior management and in relation to Affibody’s major shareholders.

Item 7 (Decision on fees to the Board of Directors)

At the time of issuing this notice the total number of shares and votes in the company amounts to 19 879 494.

In connection with the general meeting personal data will be processed in accordance with the company’s privacy policy, which is available at the company’s website www.affibody.se.

The Board of Directors

Affibody is a clinical stage biopharmaceutical company with a broad product pipeline focused on developing innovative bi- and multi-specific next generation biopharmaceuticals based on its unique proprietary technology platforms: Affibody® molecules and Albumod®.

The company operates a focused experimental medicine model and currently has two clinical stage programs. The first is a therapeutic program that targets psoriasis. The second program is a diagnostic imaging program that is directed primarily towards metastatic breast cancer.

Affibody AB is a holding of Patricia Industries.

Further information can be found at: www.affibody.com